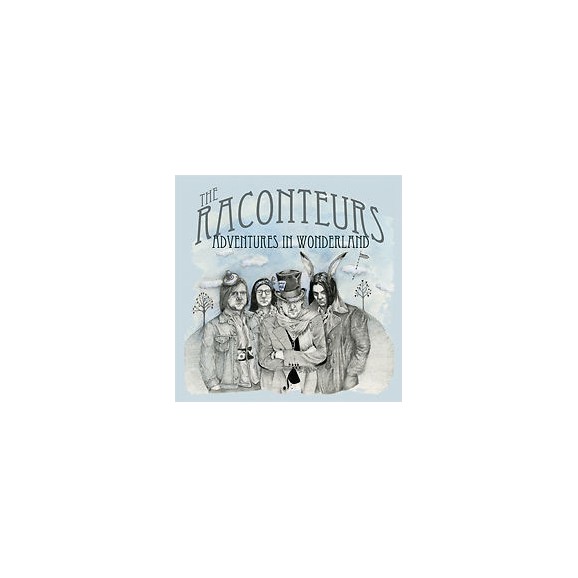 Adventures In Wonderland - The Raconteurs

Pig In A Wig

The Raconteurs were conceived in 2005 when Brendan Benson and Jack White wrote ‘Steady As She Goes’ at Benson’s home studio in Detroit. They enlisted Jack Lawrence on bass and Patrick Keeler on drums, both from the Greenhornes, and ‘Steady As She Goes’ was first released as a single in January 2006.

Surprisingly, for a band now relocated to Nashville, they chose the UK to launch their first tour. During March 2006 they played Liverpool, Glasgow, Newcastle-upon-Tyne, London, and Birmingham. This was followed by an LP, ‘Broken Boy Soldiers’, in May, containing expertly crafted songs on which their stage performances were based.

Returning for a European tour; on 27th August they played a storming set at the Leeds festival. The recording you have in your hands captures highlights of this stunning event and illustrates the potential of the band. The whole is greater than the sum of the parts. For this tour Dean Fertita was included on keyboards, percussion, and guitar. The augmented band demonstrates that the first LP was a mere taster for the power and experimentation of the live experience. This is a band that is not only incredibly tight, but can improvise and jam – skills sadly lacking among young musicians in the 21st century. They also display their diverse depth of musical knowledge by including cover versions such as ‘Floating’ by the Irish band Jape, the Flamin’ Groovies’ ‘Headin’ For The Texas Border’, and the Sonny Bono penned ‘Bang Bang’, a hit for Cher from 1966.

Anyone following the band saw it mature at every appearance. Songs departed from the original recorded versions and were not being played the same way twice. Certain songs such as ‘Blue Veins’ developed into extended adventures in sound and texture, and during the improvisation on ‘Hands’ included on this record, Brendan Benson wanders into Pink Floyd territory by borrowing riffs from ‘Interstellar Overdrive’. Then there was the business of creating a musical melee between numbers or going straight from one song into another. Witness the transition from ‘Floating’ to ‘Store Bought Bones’, or ‘Bang Bang’ to ‘Broken Boy Soldier’. What other band was playing like this? The musicianship displayed exceeds all expectations.

Have Brendan Benson’s and Jack White’s guitar skills ever been bettered than when playing live with the Raconteurs? The duo capture the artistry and inspiration of legends such as early Clapton and Hendrix, and proceed to inject all the energy of the Damned circa 1977. Hear for yourself a true example of a top quality band – bar none. This LP stands on its own merits. Play loud.