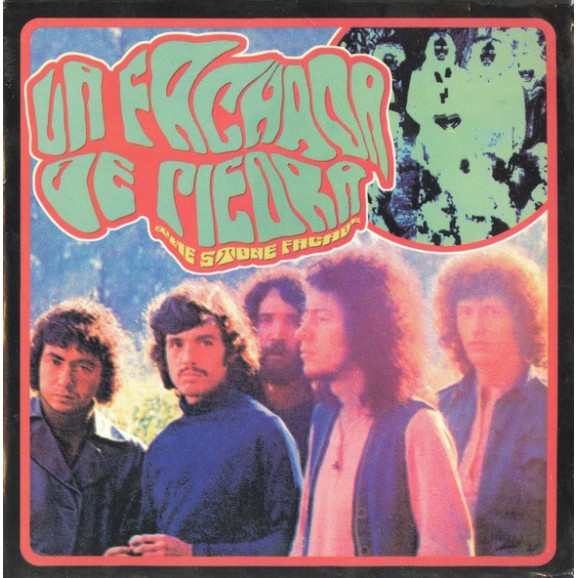 'Previously unreleased album from 1971 by this great Mexican band with two lead guitarists! One of the longest albums for the Shadoks label, the A side features 8 studio tracks (25 minutes), the B side has 7 live tracks (28 minutes). The 6 piece band hammer out their Cream/Mountain influenced bluesy underground rock complete with English vocals, some electric violin and a touch of Latin percussion. Original songs, loads of psych effects and screaming guitar in a Hendrix like wigout/psych style. Limited edition of 350, numbered copies, housed in the usual heavy cover and pressed on heavy duty vinyl.'

'La Fachada De Piedra (The Stone Facade) formed in 1968 in Guadalajara, Mexico. They never managed to release an album during their heyday but still developed a strong reputation. The band belted out a blend of bluesy underground rock with English vocals and a tad of Latin percussion. They appeared at the Avandaro rock festival in 1971, and contributed four studio tracks to the compilation album that commemorated the event, Rock En Avandaro - Valle De Bravo (Orfeon E-12-761) 1971 R2. These tracks appear on the Shadoks collection.' - Dreams, Fantasies And Nightmares
High-quality 180-gram pressing, with super-heavy cover.