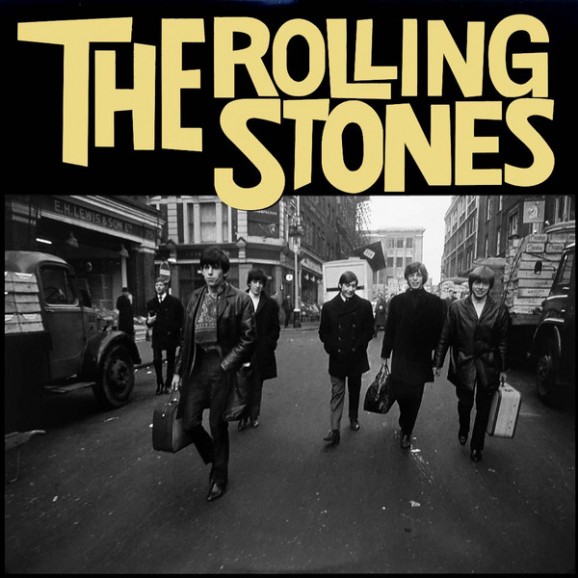 Tracklist on the cover and labels don't match with the actual order of tracks on the record. The tracks of side B are mixed up.

Tracklist on sleeve and labels:
Side A: Diddley Daddy, Road Runner, Bright Lights Big City, I Want To Be Loved, Crackin' Up, Honey What's Wrong, Come On, I Want To Be Loved, Poison Iby, It Should Be You.
Side B: Fortune Teller, You Better Move On, Bye Bye Johnny, Money, Come On, Memphis Tennessee, Roll Over Beethoven, I Just Want To Make Love To You, I Wanna Be Your Man, Stoned.

"THIS IS A COMPILATION OF THE ROLLING STONES STUDIO SESSIONS IN CHRONOLOGICAL ORDER.
Brian Jones, Mick Jagger, Keith Richards, Charlie Watts and Bill Wyman starting their sessions at I.B.C. Studios, 35 Portland Place close to the Regent Street in London where this cover picture were taken in the early 1963. The first six tracks were recorded between the 28th of January 1963 & the 2nd of February. Come On / I Want To Be Loved is their first 7" recorded at Olympic in London on 10th May. In the hot summer of 1963, between July and August, they recorded at the Decca Studios Poison Iby, It Should Be, Fortune Teller. On the 14th and 15th September they were in Kingsway, London for their first EP with You Better Move On, Bye Bye Johnny and Money. They came back to the I.B.C. Studios on 5th October to record: Come On, Memphis Tennessee, Roll Over Beethoven and I Just Want To Make Love To You. Two days later, in Kingsway, they recorded the last two songs of this compilation."